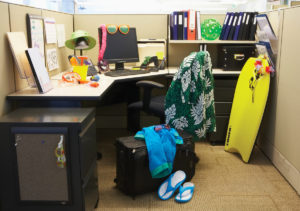 Adam Obrecht knew that happy employees would be a key to his success when starting his own company in
2010.

Part of that happiness would come in the form of time away from work. While Iowa law does not require companies to pay their employees for time away or to even offer time off from work, most business owners acknowledge time away results in more productivity, a better attitude and longer retention.

“I wanted to treat employees fairly because that makes happy employees,” says Obrecht, founder and owner of AO Wealth Advisers in Urbandale.

Here are five questions small-business owners and operators should consider regarding employee time off and leave policies.

1. How does my company stack up?

Overall, United States business owners lag behind their counterparts across the globe. It is the only advanced economy that does not guarantee workers paid vacation, according to The Center for Economic and Policy Research (CEPR), a Washington, D.C., organization that conducts research and educates the public about social and economic policies that affect people’s lives.

The United States also does not require businesses to offer their employees any paid holidays, while other countries offer at least six a year. The CEPR’s most recent report released in 2013 — one is conducted every six years and uses information from the 21 richest countries — showed that 23 percent of Americans have no paid
vacation and no paid holidays. CEPR surveyed various governments to acquire the information and found that the average private sector worker receives 10 days of paid vacation and six paid holidays.

There’s also discrepancy based on salary range and size of the business: half of those who make up the bottom fourth of wage-earners receive vacation compared to 90 percent of the top fourth of wage earners. Part-time employees are also less likely to have paid vacation, as were those who work for a small business. Those lower wage-earners and part-time workers who did earn vacation earned far less than higher-wage, full-time employees: nine days compared to 16. Five countries require employers to pay vacationing workers a small
premium to cover vacation-related expenses.

Paid time off is a critical factor both in recruiting quality candidates and in retaining current employees, according to Paychex, a company that provides human resources, payroll, retirement and insurance services for companies with one to 1,000 employees.

“As for nonpaid time off, we are very flexible with our staff, and we ask them to be with us,” says Jody Kimrey, president and owner. She’s been with the company for 25 years and created its time-off policy.

For example, one employee received 11 weeks of leave to visit his home country. Another was given time off for depression/mental health issues.

Office Installation Services Inc. employees also receive little extras throughout the year: Employees will
sometimes get an extra paid half day off during the holidays if scheduling allows, or a paid half day off after a company luncheon.

“We feel providing these benefits helps us gain and keep exceptional staff,” she says.

In addition to employee retention, time off from work also has been shown to increase productivity and focus, workplace morale and improve health of employees, according to a 2014 study by Oxford Economics, a group of economists and analysts that forecast and analyze a variety of data for clients across the globe. The group
surveyed almost 1,000 employees, most of whom received paid time off as part of their benefits package from their employer.

The study also found that when employees take time off from work, they benefit the economy with their spending at retail stores and through travel.

Many small-business owners reported that having just one person out for more than one day could cause a strain on the company, according to SHRM, because the company doesn’t have backup employees to do the work. Companies also reported they offered sick leave — 9 percent have unlimited sick time — because they don’t
want workers coming into the office, exposing others, and potentially causing more missed time and less productivity.

There are a variety of methods for creating a PTO policy and for deciding what will be offered. The first step, Paychex suggests, is to determine an appropriate number of days off. This can be done by analyzing patterns in staffing needs and looking at the PTO policies of other companies in similar industries and size.

Companies can then decide whether to enforce a rollover or “use-it-or-lose-it” time off plan. Any carryover policy will need to include a maximum number of hours that can be held back for future use, while the latter can cause a rush of time-off requests at the end of the year as employees hurry to use their remaining time, Paychex warns.

AO Wealth Advisers employs four people plus an intern. Employees receive paid time off, which is a mix of vacation days and sick leave to use at their discretion. Obrecht offers employees two weeks of PTO based on the
number of hours they work. For example, if an employee works 25 hours a week, he or she receives 50 hours of PTO.

Employers who offer paid time off will need to consider how it will be dispersed to employees: Will they receive all of their days at the start of the calendar year? Will they have to accrue days as they work? Will there be a formula based on years of service or hours worked? They also will need to decide whether the benefit will be given to
all employees or only full-time employees.

Obrecht starts his employees at twice their number of hours worked per week and then increases the amount for years of service. The company also pays its employees for nine holidays.

A company can also choose to not offer paid time off but to allow its employees to take days away from work as needed.

That’s what Canoyer Garden Center does for its employees. The business employsthree full-time positions and numerous part-time help at its Grimes location. All full-time employees are salary-based and do not receive a designated amount of paid time off in the form of vacation or sick leave, says Cammi Mills, the store manager of the Grimes location.

“If we decide we are going to take a vacation, we take the time off,” she says.

Employees are allowed to take days off within reason but must get approval for longer periods of absence, Mills says. For example, one employee got married and wenton a honeymoon during the slower season. That same person asked to be gone a few weeks later on another trip. Mills says the employee received the time away because of the hard work she had put in leading up to that time off.

Obrecht allows his employees to take an additional 40 hours a year in case of a long term illness or for bereavement.

“I haven’t had anyone push the envelope to figure out what to do beyond that,” he says.

The City of Grimes employs 50 full time workers. Nonunion employees get a set amount of time at the beginning of each calendar year to use for vacation and sick leave based on their years of service, City Clerk Rochelle Williams says. Employees can roll over up to two weeks of vacation.

If a smaller company decides it can’t afford to be short-staffed and offers paid time off, employers can still give their employees a break with a more flexible schedule, according to SHRM. This includes allowing employees to work from home or to leave early for personal or family obligations.

Any time-off policy needs to be in a written format and given to employees so they understand it and can ask questions, according to Paychex. This can be done at an annual benefits review meeting or by including the information in an employee handbook. Employees will want to know how many hours/days off they’ll receive, how the PTO will be dispersed, how they will request time off, how much time they must give in advance, how they receive approval, and what happens with unused time.

Obrecht used the handbook from a company where he previously worked to model his time-off policy. He incorporated his own policy into his company’s employee handbook.

An attorney can review any policy to ensure it meets all wage and hour laws. Employers must then follow their own policies, practices or contracts regarding benefits, according to Iowa Workforce Development. If a company
does not have an agreement with its employees regarding benefits, it is not required to pay employees for sick time, vacation or holidays, IWD reports.

In addition, an employer is not required to pay an employee for unused vacation if he or she is fired or quits, unless it is written into a contract or the company’s policies or procedures stipulate that action must be taken,
according to IWD.

The company’s policy also needs to explain when an employee can request vacation or time off and under what circumstances it might be declined. For example, if a business has a busy season such as accounting or tax preparing, the policy should explain that vacations won’t be allowed during that time.

Any policies must apply equally to all employees in the same classification in order to prevent claims of discrimination, human resources experts say.

All time off policies for Office Installation Services Inc. are included in the company’s employee manual. Employees also receive a biweekly payroll letter that gives them an update of upcoming paid holidays or paid
company holidays/time off, Kimrey says.

At AO Wealth Advisers, Obrecht decided he needed to make some changes to the vacation policy after a couple of years in operation. Heinitially made employees wait five years until they received three weeks (or three times their weekly hours worked) of vacation. He lowered that to two years into order to make his company more
attractive.

“Once you’ve worked with someone for a couple of years, you know whether you want to keep working with them and retain them,” Obrecht says. “It’s been a fair and good policy.”

He continues to review whether there’s a better option and is considering whether to completely eliminate PTO and use more of an honor system where employees can take off the time they need as long as their work is completed.

“If you have a sick kid, be home with your sick kid, but get the work done,” Obrecht says. “You find the time to make it up instead of worrying about PTO.”

He continues: “We haven’t figured out how to do that yet. We’ve talked about it but haven’t found a way to do it.”

Having a smaller company allows Obrecht more flexibility to work with his employees when they need time away.

“Everybody’s situation is unique, but to me, that’s the value of a small company,” he says. “We can be unique in our solution. If someone is having a hard time with ‘x,’ and we need to deal with it, let’s deal with it and figure it out.”

Employees at Office Installation Services Inc. can receive a maximum of three personal days and four weeks of vacation. Kimrey says she evaluates the policy and has made changes since she took over ownership. When she started, therewas no PTO or bereavement time, and employees only received five days of vacation after working
at the company for a year. ♦