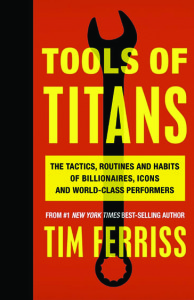 Tim Ferriss has interviewed more than 200 world-class performers in his podcast, “The Tim Ferriss Show.” Guests range from super celebs and athletes to legendary Special Operations commanders and black-market biochemists. His is the first business/interview podcast to surpass 100 million downloads.

Ferriss says what makes his show different is his relentless focus on actionable details, which are reflected in the questions he asks. What do these people do in the first 60 minutes of each morning? What do their workout routines look like, and why? What books have they gifted most to other people? What are the biggest wastes of time for novices in their field? What supplements do they take on a daily basis?

“Everything within these pages has been vetted, explored, and applied to my own life in some fashion,” says Ferriss. “I’ve used dozens of the tactics and philosophies in high-stakes negotiations, high-risk environments, or large business dealings. The lessons have made me millions of dollars and saved me years of wasted effort and frustration.”

“An Invisible Thread: The True Story of an 11-Year-Old Panhandler, a Busy Sales Executive, and an Unlikely Meeting with Destiny”

by Laura Schroff and Alex Tresniowski 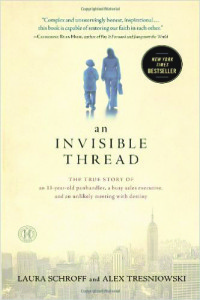 “An Invisible Thread” tells of the life-long friendship between a busy sales executive and a disadvantaged young boy, and how both of their lives were changed by what began as one small gesture of kindness.

When Laura Schroff brushed by a young panhandler on a New York City corner one rainy afternoon, something made her stop and turn back. She took the boy to lunch at the McDonald’s across the street that day. And she continued to go back, again and again for the next four years until both their lives had changed dramatically. Nearly 30 years later, that young boy, Maurice, is married and has his own family. Now he works to change the lives of disadvantaged kids, just like the boy he used to be.

“An Invisible Thread” is the true story of the bond between a harried sales executive and an 11-year-old boy who seemed destined for a life of poverty. It is the heartwarming story of a friendship that has spanned three decades and brought meaning to an over-scheduled professional and hope to a hungry and desperate boy living on the streets. ♦